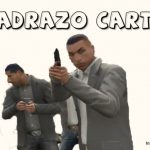 The Madrazo Cartel (AKA Madrazo Crime Family) is one of the active gangs in the Grand Theft Auto 5 game, mostly because of their leader Martin Madrazo, who appears as a “Legit businessman” in the game.

Although the Gang is not very large itself it is comparatively hostile to the other gangs in this game because of the tussle between Martin and Michael De Santa.

The Madrazo Cartel does not have a lot of influence over many areas as the only territory that they seem to have control over is Martin Madrazo’s own ranch which serves as the center of their operations.

The members of this gang, unlike the other gangs in the game, can be a bit hard to recognize as they wear different apparel but the common thing about their attire is Flying Bravo polo t-shirts with a tattoo of the number on their sleeves.

The Gang doesn’t have any particular enemies as Martin mostly uses the muscle of the cartel to resolve his personal issues mostly related to legal troubles among other things but Ballas and Lost MC seem to be at the top of their rivals list.

One of the protagonists, Michael starts off on the wrong foot with the gang’s leader and he decides to kill Michael but ends up hiring him for extra muscle for his dirty deeds which involves trouble with the jurors, judge and others involved in the legal cases against him and many other issues that needed “taken care off”.

More About the Madrazo Cartel

The members of the Cartel are mostly young Hispanic guys working under the leadership of Martin Madrazo and the heir being his son, Miguel Madrazo. The Cartel is involved in many crimes including drug and weapon trafficking, prostitution, and contraband.

Madrazo Cartel’s choice of rides includes cars like Baller, Cavalcade, and Buccaneer, and a lot of others if we talk about the online version of the gang.

Although the gang does not have many territories under their control to defend they like to use the power of weapons and the ones they mostly use include a pistol, SMGS, Baseball bat, Assault rifles, and sniper.