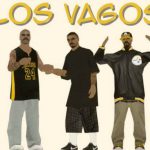 Los Santos Vagos or otherwise just Vagos is the largest Mexican / Hispanic gang in Grand Theft Auto 5 game. Just like many other gangs in the game Vagos are probably based on the real-life gang called “Surenos” as many of the members of this gang are bald like them. Edgar Carlos is the leader of the Los Santos Vagos gang, who is currently dead, RIP.

Los Santos Vagos is a large gang with most of the Los Santos territories under their control and being one of the largest gang, Vagos are divided into 3 units being the Northside Vagos, Eastside Vagos, and the original Vagos. They control areas like the entire Ranchos neighborhood, Vespucci Beach, and areas near the Cypress flats.

The Vagos just like the other two major Gangs, Families, and Ballas can be easily recognized by their favorite sports team Los Pounders’ attire with yellow t-shirts with numbers on them. But that doesn’t make them friends with the above-mentioned gangs but they are at the top of their enemies with Los Varrios Aztecas and Lost MC as well.

The Vagos have immense power and they use their mind as well to conduct all sorts of criminal activities throughout the city and even out the city, although many of their top-ranking members are imprisoned.

Franklin, being part of their rival gang, Families falls under their radar which also includes his best friend Lamar as he gets himself into trouble with the gang but luckily, survives because of Franklin’s brain.

The members of the gang are mostly Mexican/Hispanic but some of the members are also Guatemalan, they can be seen walking around holding beer bottles on the streets in groups. They are involved in all sorts of major crimes in the city such as Drug trafficking, weapon trafficking, document forgery, vehicle trafficking, and other crimes.

Vagos main fronts for their illegal activities are Rancho Projects and McKenzie Hangar. Their choice of rides goes all the from Bicycles like BMX to cars like Voodoo, Manana, Peyote to Half Trucks.

They can be very violent when it comes to other gang members invading their territory, they carry a lot of weapons but mostly the ones they use are Knives and Baseball bats for the close-range combats and Pistols, SMGs, shotguns, and Assault rifles when it comes to long-range gunfights.