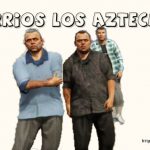 Table of Contents hide
Aztecas Background
More About the Aztecas

Varrios Los Aztecas, also known as Aztecas, is a considerably small Mexican gang in Grand Theft Auto 5 and it appears to have been inspired by an ancient civilization that formed the base of Mexican culture. Aztecs and many other Chicanos tend to believe they are from this aboriginal group.

The Aztecas have control over several territories, but they are most active in the east of Central Los Santos Hospital around Northern Rancho. Alamo Sea being their headquarters, Aztecas also hold the territory in Blaine County. The Aztecas can easily be recognized by their teal/turquoise-colored clothing in cholo-fashion. Although their style of clothing is similar to Marabunta Grande, they do not display any tattoos on their faces.

The Aztecas are also connected with cartels and are presently at war with Marabunta Grande, a Salvadorian rival gang. The war with the rivals, in the Senora Desert region, is mainly over the drug trades and trafficking, supply routes, and weapons smuggling. It is also assumed that they are at war with North Side Vagos, which is set in the northern part of Rancho, because of them being in their close proximity.

Trevor, one of the main characters of the game and also the owner of Trevor Philips Enterprise, is in competition with Aztecas over the weapons trade in Blaine County. Trevor became a thorn on their side when he destroyed Ortega’s trailer. In retaliation they decided to take him down, attacking the Sandy Shore meth lab, but they were defeated miserably.

More About the Aztecas

The members of the Aztecas are Mexicans by the origin and their leader is Ortega. The Aztecas, despite being a small gang, is involved in major crimes, such as drug trafficking/manufacturing, arms trafficking, vehicle trafficking, and contraband. Therefore, the main source of income for Aztecas is drugs and arms trafficking.

The Aztecas use the Alamo Sea as their front to hide all their money trails and other shady operations. Aztecas can be seen in groups of 3-5 peoples standing on the sidewalks all around the northern Rancho. However, their rides often include Mesa, Ingot, and Sultan.

The Aztecas, being a relatively small gang, generally have to be cautious of their rivals’ intentions as they have previously been attacked many times. Their favorite arsenal includes Pistols, Micro-SMGs, SMGs, and knives that is ready to be used on anyone if provoked.