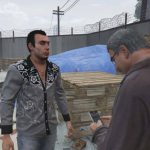 Armenian Mob is one of the smaller criminal gangs in the Grand Theft Auto 5 game as the name suggests, it’s more of a small criminal group compared to the big gangs in the game. Armenian Mob is also inspired by a real-life Los Angeles-based crime syndicate by the name of “Armenian Power” based on their similar characteristics.

The gang doesn’t have a lot of territories under the control and their hotspot is based in La Puerta’s Salvage yard which is like the base to them. The members of the gang can be seen wearing brown leather jackets along with button-down shirts and on top of that, they like to show off their golden chain, some of them even go with the typical Cholo style like the real gang.

Being a small gang, the Armenian Mob doesn’t seem to have many enemies and that’s probably because they don’t have many areas under their control where the other gang members take a stroll out to be confronted by them or this gang could be non-hostile.

Simeon, Franklin’s boss from the Deluxe Auto Dealership is connected to the gang in terms of business and protection, as he is really into some shady businesses of his own which are mostly carried by Franklin and his best friend Lamar.

The members of this gang as the name suggests are Armenian, both young and old. As far as their criminal records are concerned they are involved in many crimes such as Weapon and Drug Trafficking, Car Jacking, Contraband, and other small crimes but that’s nothing compared to what the other gangs do.

The only place they use as a front for their crimes is the Rogers Scape and Salvage yard which is the hub for all their criminal activities in the city of Los Santos. Their favorite Arsenal mostly include weapons like knife, pistol, minigun, and even rocket launchers which is totally insane!

The vehicles they use for travel mostly include (but are not limited to) Tornado, Peyote, Buccaneer, Futo, and Rogues. The gang doesn’t play many parts as far the storyline of the game is concerned like the other major gangs.