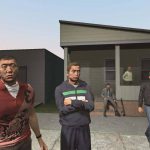 Table of Contents hide
Kkangpae’s Background
More About the Kkangpae

The Kkangpae gang is one of the smaller gangs in the Grand Theft Auto 5 game. The name Kkangpae is Korean which translates to “Thug” in English. This gang doesn’t play an important role in the storyline of the game but it does make appearances between now and then. The gang works under the leadership of a Korean guy named “The Boss” pretty cliché, right?

The Kkangpae gang, being one of the smaller gangs in the game doesn’t have a lot of territories under their control and the only place they seem to be hanging around the most is Ginger Street in Little Seoul. They can be recognized by their button-down shirts mostly in blue color with shades on and ties, as it happens to be.

Kkangpae is particularly hostile to many of the other gangs and also all the three protagonists in the game. Other gang members can’t hang out too close to their territories as they’d probably get attacked by the members of this gang.

The gang is involved in business with other gangs like the Madrazo Cartel and Los Santos Triads and as for our protagonists, Kkangpae isn’t on good terms with any of them.

The Kkangpae gang is made up of both young and old Korean gangsters and they might even appear to be gentlemen but that’s not the case in reality, as it highly contradicts their hostile nature. The Gang is involved in all sorts of crimes that one can think of, their main crimes ranging from extortion, drug trafficking, robberies, car theft, weapon trafficking, and the list just goes on.

And just like any other gang in the game, they need a way to clean the money and for that, the font they use is Hen House and Fridgit factory. Their choice of rides mainly consists of vehicles like Dubsta, Granger, Fugitive, Comet, Feltzer, and many others.

They also love to show off their weapons to create a sense of threat to other gang members and the weapons they mostly use are SMGs, Pistols, Knife, Combat MG, Revolvers, and others.